Alteo and W-Scope, world leader in the production of separators for electric vehicle batteries, have signed an agreement to launch a project to build the largest separator production site in Europe.

This project is part of the development of a French and European value chain in support of the numerous gigafactory projects.

The site will be the only 100% electric site in Europe.

Production is scheduled to start in 2026 and will lead to the creation of more than 1000 direct jobs.

The separators produced in this new plant will incorporate SEPal® high-performance aluminas.

We would like to thank the Alteo teams in France and Korea who have made this first step possible.

Download the press release of the Ministry of Industry (in French) 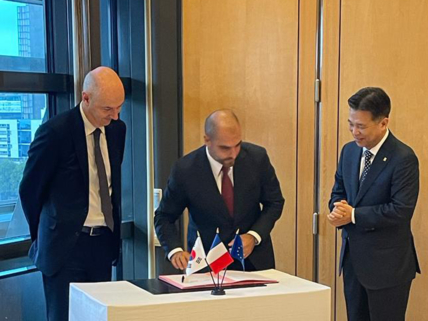 Mr Roland LESCURE, Minister Delegate to the Minister of the Economy, Finance and Industrial and Digital Sovereignty, in charge of Industry, Mr Won-Kun CHOI, President of W-Scope, and Mr Alain MOSCATELLO, President of Alteo Holding.